1. Hey Andrea, any advice on how to remain vulnerable as an artist in a political atmosphere where it can be dangerous to be vulnerable?

I think it’s important that one be aware of others’ vulnerabilities as artists in any atmosphere, not just the ones that affect one personally. One should make space for others. There is much less vulnerability in community and in learning how to maintain community by acknowledging, accepting, and discussing difference. Some of the writers I look to for this are Cecilia Vicuña, Rosa Alcalá, Naomi Shihab Nye, aracelis girmay, Éireann Lorsung, Roger Reeves, Rebecca Solnit, and Teju Cole. I listen to Rachel Zucker’s Commonplace podcast as it seems to me that in each episode, Zucker is exploring this question you ask with a number of writers.

2. Hey Andrea, what is the relationship between your photography and your poetry?

I like thinking that they have spoken, are speaking, will speak to each other in language(s) I’m unaware of but will be fluent in one day. The important part for me is to be looking––to be cultivating awareness––and then document it in whatever form it wants to be realized.

3. Hey Andrea, got a favorite quote about poetry?

I’ve been carrying this line from Susan Briante lately: “And what is feeling without document?” Pablo Neruda’s poem “Dulce, Siempre” (“Sweetness, Always”) is one I keep close, especially for this line: “No tengan miedo a la dulzura,” which translates as, “Don’t be afraid of the sweetness.” I appreciate writers and artists who risk sentimentality in their work.

Hmmm… my favorite word: and. It’s deceptive in its simplicity: three letters, one syllable, yet it’s a word of great utility. It makes connections, even between the most unlikely of things. In Spanish, it translates to y, but not phonetically. Why? It’s a word that questions. It is the first three letters of my name. It’s a word that helps build other words I love: hand, grandma, grandpa, understand, ampersand, granadilla, icecreamsandwich, oleander, dandelion, borderland. It’s a word that promises possibility.

5. Hey Andrea, any artwork that inspires you to write?

I’ve recognized that I find myself writing about David Alfaro Siqueiros’ work whenever I encounter any of it. I’ve been traversing in the dreamscapes of Remedios Varo for years now, too.

6. Hey Andrea, could you tell us about your postcard project?

A couple of years ago, I began a poetry postcard project, which this year I realized is a poetry postcard migration project. I usually make anywhere between 20-40 cards. All involve some sort of sewing, and people elect to have a postcard mailed to them. This year’s project was created while at Vermont Studio Center but had been gestating for a while. (her)ida builds upon Gloria Anzaldúa’s understanding of the border as an open wound. In contemplating the border fence/wall and earth as a body, it became apparent that what people are willing to do to the body they live on, people are willing to do to bodies they live among. (her)ida is a herstory of the wound created by the border wall that I don’t think enough people (at least many of those who support the current administration) realize already exists. 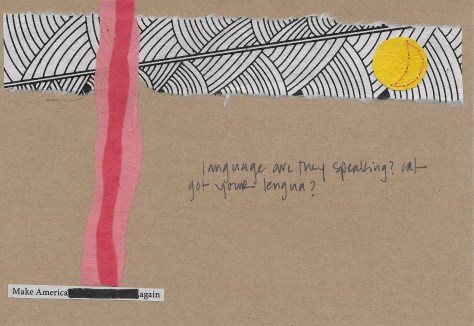 7. Hey Andrea, any poets you think should be household names in poetry households?

How do we get even one poet to be a household name in non-poetry households? I’m thinking aracelis girmay.

Teju Cole’s  Blind Spot, which seems to me a book of poetry, and I find I’ve written short poems similar to haiku after each photograph and its accompanying text. Teju Cole: “Your progress is not a line, direct or winding, but a flickering series of scenes.”

I have a  Peanuts comic strip pinned to the bulletin board in my office. Charlie Brown and Lucy sit before a record player, and Charlie says, “This song always depresses me.” In the next frame, he leans against the chair: “It brings back such sad memories…you know what I mean?” He’s then standing sullenly next to Lucy and says, “I’ve never heard another song that depresses me the way this one does…” Lucy finally gives Charlie her attention as he says, “Play it again, will you?”

10. Hey Andrea, could you tell us about your work with MIEL?

I’m grateful and delighted to work alongside Éireann Lorsung and her beautiful press that is MIEL,* which she founded in 2011 to promote and publish difficult, innovative, intelligent, and deeply felt writing and visual art. We are dedicated in particular to supporting and promoting the work of women writers, writers of color, and QLGBT writers. The projects I’ve had the good fortune to work on have opened me up to thinking about art and the creative process in different and profound ways. The [ S O F T N E S S ] anthology is one I’ve worked on with Éireann, Kristen Case, and Margaret Chapman for well over a year now, and I’m eager for it to find its way out into the world in 2018.

*A note from Andrea on MIEL: While this beautiful micropress is on indefinite hiatus, I’d like to note that the founder and editors have shifted their energies to other creative work that includes more intentional community-building objectives. Stay tuned!