For years, I met weekly with a group of local writers. Our prompt each time was to bring some kind of text—a newspaper, book of poems, cookbook, dictionary, children’s book—and then create a bank of words, randomly chosen, and write from them. We’d set the timer for fifteen minutes and go. It was always astonishing to me to see how differently each person related to the same list; where one person would narrate around an object, another would play with sound. Some words seem to belong near each other, and then there’d be a few strange stragglers that you had to finagle into the draft somehow, often yielding surprising turns or associations.

What this taught me: Anything in the world of texts can become inspiration for a new poem. It helps to collaborate with others, even if you’re just gleaning mojo from them rubbing elbows at the same table. And never underestimate the power of randomness to invite your brain to do something different with language.

Honestly, the submission process has been torturous for me at times. Early in my writing career, I would scour all the calls for submission and make extensive lists of dates and entry guidelines. I’d spend hours gathering them and then not send anything out. In the process of putting packets together, I’d get overcome with insecurity and put it off until the next time I felt compelled to try.

Good friends who were ahead of me in the publishing game suggested that I treat it like a job and not a measurement of artistic worth, and some even shared their very personalized and idiosyncratic systems. When I saw writers that I admired getting dozens of rejections before a piece would be published, it helped me let go of that naïve, somewhat ego-driven belief that the submission process should be easy if the work was good. You have to be tenacious and unattached to the outcome and understand that there are too many variables to account for. The only thing you should be concerned with is making the writing as good as it can be. Apart from that, it’s mostly a numbers game.

I teach a course in editing and publishing at Chico State and one of the first things I teach my students is how to become a discerning reader of literary magazines. My own submission process became a lot more streamlined once I did the research and discovered lit mags that might be more amenable to my work than others. Many writers make the mistake of thinking that you have to get published by a top tier publication for it to mean anything, but there is a universe of literary publications out there to join up with—ones that will provide you with a readership, a community of fellow writers, and a platform for your work. The question I encourage them to ask themselves is, “What kinds of literary/cultural conversations do I want to be a part of and who is creating a space for those conversations?”

3. Hey Sarah, got a favorite lyricist? (or musician?) Care to share a video? (you can make this two different questions, if you want)

I’m someone who makes mixes for all moods and occasions—“Elusive Mix,” “April Songs,” “Dirty Dance Mix,” “Pushing/Pulling,” “Forestville,” “Rosh Hashanah”–probably a remnant of the hours and hours spent recording songs off the radio as a kid trying to get the timing exactly right on the tape. (My husband and I have talked about how there are songs we hear now and still expect the DJ to start talking over the last few seconds…) Each one is like a little time capsule representing whatever I was struggling with or celebrating at that moment.

The original songwriters and musicians playing on the turntable growing up were Cat Stevens, Elton John, Joni Mitchell, Simon & Garfunkel, Jackson Browne, and the like, so they still find their way onto my seasonal mixes.

Some of my favorites are Sharon Van Etten (I can’t get enough of the build up in this song),

Bonnie ‘Prince’ Billy (this video is poem-like), and David Bazan/Pedro the Lion. My favorite Pedro album is “Control” and when he was touring it originally I happened to catch an acoustic show at a local coffee shop. I’ve never witnessed such total attention in an audience, except perhaps at a poetry reading. That rare thing happened where it felt like there was an almost tangible thread bound between him and all of us. It was dark and earnest and ultimately, utterly transcendent.

I am fortunate enough to rent a writing studio in downtown Chico. It’s a big, corner office with wood floors and tall windows that overlook the downtown park plaza. Most of my books are there and some creature comforts, a little couch to take naps on, and an old double-sided desk from a thrift store. Recently, I’ve been teaching a nonfiction workshop there on Monday nights and bought a long table to gather around.

My grandmother had a dedicated room in their home meant just for her creative and spiritual explorations. She surrounded her desk with little statues, quotations, books, stationary, and correspondence. Because of her example I’ve never questioned whether it was okay for me to want a space that was just for me, but it took ten years of me writing in the car, at work, and at the kitchen table before I decided I was disciplined enough to use a dedicated space. The moment I open the door to my studio, my brain switches into a different gear and the quality of my thoughts change. Sometimes I can only get there for a couple of hours. Other days, I’m there from morning till night.

The first blush of the almond orchards in bloom; trains announcing themselves throughout the day; burritos that could make you cry; the creek overflowing after a week of rain; the canopy of trees shading your path through Bidwell Park; couches charred like marshmallows; rainbows of produce shifting with the season; the inhale and exhale of Heidelberg’s at Wild Ink Press; the Sierras in the distance; the golden Ginkgo center line down the Esplanade in autumn; ten minutes to anywhere else.

6. Sarah, is there a journal you think everyone should check out?

I think everyone who is writer should be actively seeking out and supporting literary magazines. Sometimes I think we’ve lost sight of their larger cultural value and read only as far as the ones that publish our work. We hear a lot about the financial struggle to keep a publication alive or the dos/don’t of the submission process, but I wonder how often a writer considers why we do this at all. If you read literary publications from the turn of the century, you’ll find editors risking everything to bring particular voices into the light. Some of those writers are who we study in literature classes today. Future readers will look at the literary landscape of today to inform their understanding of the chaos, communities, and locations we’re living through. I would recommend the anthology Paper Dreams: Writers and Editors on the American Literary Magazine to anyone wanting to know more about the history of literary publishing.

There are so many journals out there curating awesome content issue after issue. A few that I subscribe to or read online are: The Pinch, Sixth Finch, diode, Burnside Review, Brevity, The Normal School, Passages North, and 32 Poems.

I would be remiss if I didn’t plug Watershed Review, our literary magazine at Chico State. A group of graduate students and I brought it back to life as an online literary publication after it was cut in 2008. Working with students who want to do this kind of work in the world is one of the best things I get to do in my working life.

I recently read Lynda Barry’s Syllabus and experienced full-blown, child-like awe. The book is a collection of artifacts from a course Barry taught at the University of Wisconsin called “The Unthinkable Mind”—an interdisciplinary course exploring the biological function of the arts and the psychological mechanisms of the creative impulse by blending cognitive science, visual art, and writing. From a teacher’s perspective, she reminded me to think about the classroom as a site of experimentation and play—intentional play, but with the focus on process rather than a particular end point. I loved how she allows us to witness the entirety of her inquiry—method, theories, outcomes, failures, as well as where she veers, and at times, digs deeper.

From a writer’s standpoint, the book functions as a portal into your creative consciousness. Barry encourages her students to keep a daily journal—something I have always struggled to do consistently. Her method is simple and meant to increase attention to the world around you. In a composition book, you draw four squares. In the top left, you write down seven things you did. In the top right, seven things you saw. In the bottom left, you write down something you overheard. And finally, in the bottom right, you draw something from your day. She says it should only take five minutes total to do this.

This method of keeping track of a given day was immediately compelling to me, mostly because it makes the process of noticing less precious. So many of the tips we give writers are burdened with artifice and ritual. Don’t get me wrong, these preferences and gestures are wonderful when they emerge from an authentic place, but more often than not, they make creative people feel like they’re not doing it right. It seems democratic somehow to suggest taking five minutes a day to track the strange, beautiful or mundane details of your existence in a journal that costs a dollar or two. It inspired me, anyway.

Brian Teare’s The Empty Form Goes All the Way to Heaven left me speechless. He does things on the page that feel organic, bodily—responsive—kind of like a school of fish or a flock of starlings making shapes. We’re trained to look for order in the way a poet moves, pauses, and gives cues for how to read a particular poem. The way Teare apprehends white space feels both confounding and inevitable, ultimately creating many paths in and out. He also does things typographically that I admire, which made boundaries and containers for the lines that couldn’t have been created otherwise. And because he was in an intimate conversation with another artist (Agnes Martin), there is also a sense that he’s working toward a kind of architecture, tracing thought and imagined conversation into a visible prayer or meditation. You can read a few poems here

9. Hey Sarah, could you tell us about the first poem you wrote? 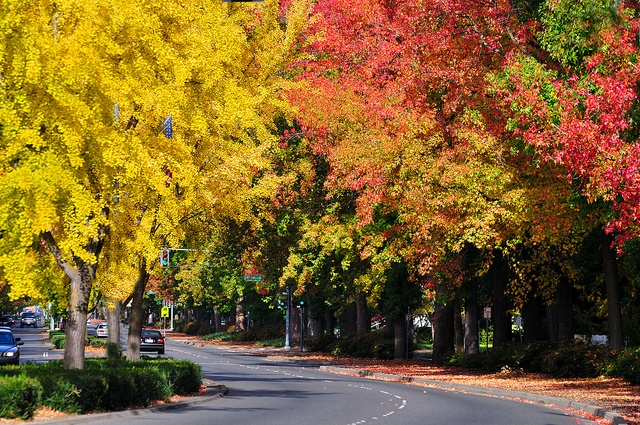 In fourth grade, I wrote and illustrated a poem called “The Trees” in which I compared a forest to a group of women standing and swaying. I remember writing it not because the image was anything special, but because I recognized consciously that I was having a poetic thought. I was stretching past the literal. When you conjure a metaphor at an early age, you are convinced you’re the first person to think of comparing this to that. In a way, it feels like magic—the ability to transform one thing to another in the mind of your reader. Sometimes, I still get that feeling when I write—like I have a secret. The object may belong to anyone who observes it, but my rendering is a kind of linguistic DNA.