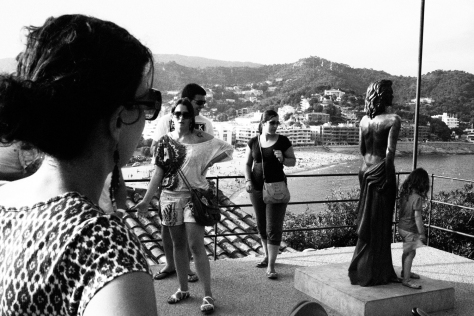 calling it all memory is one way

to change its effects.

seeing my future memory, during my death.

being in my dying mind, looking at me,

seeing myself now. it isn’t prediction.

it is memory and i don’t recognize the

place where it happens yet, and i don’t

need to know if i’m old or just look old.

on a ruin of a commercial building

lagging with grass and no sense of

becoming valuable, right next to another building

and right behind a sidewalk and right under

my feet and legs and nose and my

vision peripheral to my literal vision

that helps me see that you will be in love with me.

were we talking with our mouths?

sleepy not mad, looking through a

i learned to listen to you describe

and now we are seeing this image

of my grandmother raising someone’s

hurt children while someone was

what was said though. all the sentences

about it made less sense than what we

could see when we spoke about

passing the skein of light or touching

someone by letting their pain

make a crater on you and closing your

arms around the whole them.

i didn’t say that either.

neither of us said this.

i said a net. the touches make a light net.

i don’t know what i said, other than

i told you my friend’s dream about the

dream person pointing to the wound in the sky,

saying we need to “fix the memory of souls to

heal the people”. i saw it oscillating through

your face and feelings. it surprised me

when you said that you finally understand

“spiritual technology”. all of the gifts

squeeze forward through the fibers of the net.

on that night, over the course

of more steps out into where we went,

we took turns feeling the pain of the other one’s

death, and sent us each a message about how

to find each other when we become separate

again, the worlds-between kind of separate,

and we took turns being the pained one

imprinting the feeling of standing in the

snow in the morning in the future when i am old,

remembering us together on the couch right now.

SET IT DOWN SO IT CAN LIVE

i was born ready yesterday.

i learned what they taught.

kicks can come out of the sky

and knock you over.

glass baseballs come out of the sky when

god wants you to practice more.

i ate it and didn’t die.

i unscrewed the lid from a broken jar

i got a job and did not grow faint:

to take a bath

that will shift part of history.

they gave me a palette, i used it.

i don’t mind saying it’s how i

paid off my loans.

a 15 second summary was given.

i can guarantee it’s not a maze.

when i hear the ticking beerheart in that body

there’s a chance i won’t flinch.

the drawer is thick. i think it is full.

i pull. now it is definitely open.

i love my mouth despite its problems.

were fucking so i wouldn’t be wishing.

i’m not exhausted yet, but since it’s bedtime,

i got into this situation with my pillows and covers.

in a purposeful act of refusal to know,

i reach my arm out, hoping it will stop on something.

it fully extends. i make a fist with my face.

sometimes: it takes a long time to finally get the “no”.

every time: i wait for it.

two squirrels are crawling around and around

the treetrunk. the lead one turns around, but

turns back around, returns to crawling away.

for awhile i believed an idiot who said to me

“you are going to make someone a very unhappy husband.”

erasure to raise me and another daughter,

starting with a son. she didn’t disappear.

i sent her a text it said

“to have a mother who loves you for being independent

is to have a mother who fosters rebellion in your heart

and revolution in your bones -judy chicago”

things were different and possible

because circuits were opened.

i’m changing some settings back so i can

return to the forest of no kisses.

inside the “no” i have been growing my arm.

now i can reach the love at the middle of my memory.

i touch my mouth to that lake i remember.

my mother told me about when her mother died.

“i think she got an explanation about what was going to happen,

“i don’t think there’s very many people in hell.”

a mostly red cardinal and a mostly brown cardinal

are sitting on a middle branch, mostly still.

they’re startled by me when i crouch to watch them.

the red one goes down and hides.

the brown one goes up and seems fine.

memory water goes into my mouth.

ROUNDABOUTS ARE IN OUR CITY

not only rape culture, but literal middle-schooler rape.

my house smells good with the things i make up

under supervision from the internet. my friend posts

about being worried that someone doing extended leering

from a car is casing her body for trafficking. at first

i feel my conditioning say that this is emotional embellishment

then the artificially immobilized bodies containing

millions of women smash down on my thought

because they are the ground i was diving towards for a long time.

my main conflict in life is to answer the question

“do I want to be fucked with or not?”

men can argue with this poem but nothing they say about it matters.

you are probably smarter than your congressman,

and the combined executive leadership of the shitty company you work for,

and the loud man everyone is listening to over beer.

I think I have an ancient ear infection. it makes me hear under the utterances.

it is abundantly possible that you are smarter

than your boyfriend no matter how old or educated he is.

you are smarter than your dad in several ways.

fewer if he knows how to cry in front of you, but still some.

while defining themselves as it, but you are.

for the sake of illustration I’m gonna call it a computer that is inside you, making decisions.

i’m making biased assumptions through this whole thing and

GUESS WHAT. SO DOES THEIR EGOTISTICAL SCIENCE.

i’m being my own twin that murders their twin. that’s what living

inside this shit everyday accomplishes.

the computer inside you knows how to live and what should happen.

it knows what to say. i’m trying to be both Grimke sisters at once but i’m neither.

and forgetting even to credit yourself with that ability.

cement and you learn how based solely on context clues!

use your excess propensity to dare them to fuck with you.

in stream of consciousness, then edit them by deleting the very few untruths.

you might consider crying for a long time and asking your

THE SILKWORM NO LONGER LIVES IN THE WILD

absorb the river of disruption

get to the room.

keep the noise in the room.

stay in the noise.

crank around your axis-

and wait for sparks.

the storms nudging into my

dream continued through the front

of my face, side of my head.

through the storm i felt my friends

the storm a borderless gel

make irregular thumps over my house

and their houses. we are living

in convoluted shelters. i clean the

the whole map is here on earth

with us. lightning released the fever

that had been inside my gland.

we each have a piece sunk deep

under our hologram, the thing

we see when our own symbols all

glint simultaneously. in the song,

i hear directions: get in the water,

it’s substrate, the water will charge,

will be charged by a source,

and we will charge and emit,

and the water will conduct every

buried piece. it will be trouble.

it will be our trouble together.

our fevers will break. our trouble

will break us through.

Amanda Huckins is becoming overconfident in fighting for the inexplicable realities we all deserve. She’s technically inefficient. She’s an information conduit, mainly. The information often makes her cry pretty hard as it speeds through the chunk of the grid that is her.