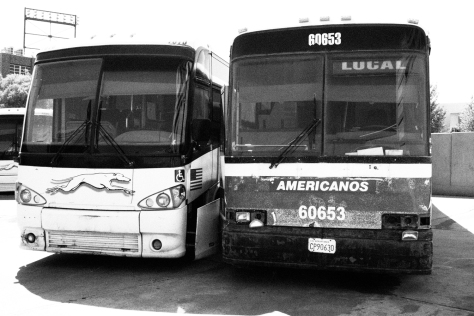 from DON’T CALL IT REGINALD DENNY

Those of us who are happiest driving alone to Target

Hardly glance at the night even near the glass

I know the injunction

So the only resistances are to change the frame

Or stand naked in the buzz of failure

And tell it plain until the plainness leaves me loosed

At the outleaping of recursion so I know

I’m just here in a body

Outside our window under the helicopter’s searchlight

The gravel bites through to the knees, the searchlight is a thing

No cicadas leaves in the quiet the Christ thing

Or a little author function to turn into, smug

Into a preceding story goes a gap

The night is one more thing to pick up, I know

How sacrifice works by substitution

But what if time doesn’t pass

And it’s always there behind the feelings

Stripped by the searchlight

The wisdom of the body and articulations

Of capital through time mean some things

The greatest good in feeling, say

Or a surging arrangement

The edge tolerance of a car

Falling down the hill’s paved turns

Matched precisely to its instrumentation

That’s how it starts

In the mouths and busy

The histories where never

Have numbers gathered in common

And sent knocking in this air, it’s okay

Expensive hairstyles ride on it too

Right over freedom that’s been wrung out to withstand

The cant of advocates, expositors

The kind that sometimes loosens my jaw shitting

To a news video on my phone nature compels cleanliness

Imitating the dusty scrub of this valley when

Of our good street’s

I could ask you to let me be the professional

You’re the god who knows

Maybe those are stages of consequence

Invites the strangeness of the white face

Which blended with certain American things

In fable by greater appetites until death

Is a field in the ingesting body

Even the fingers on the outside greedy to carry

So curiously disquieting what was said

About the strangeness of the coloured races

Which blended with certain American things

Confessing the dear already known about a sway

But where were you born before that

Free radicals, the Tiqqun Collective for one

To describe Imperium’s outlines but never

Their own posed facial stunts

A thing being a position

That makes the darkness a momentary solution

For what heat night accepts from what asphalt

I mean do those happiest in choosing

As available to being seen

As someone else’s put off return to a homeland

As Dahomey stands in as the sass

Of nature’s whiteface comedians is here

As ornament is here saying, “Ultimately,

It’s the omnipresence of the new police

That has made the war undetectable”

Which is a laughter that is a type

In a set of my laughters

Each coded to an aspect

And color and charm in the pocket

This one is white across two or three shades

And still not being as good as this

Not so white as we are painted

To enter a next morning into a desert’s turns

Toward the sun in its waxes

On leaves and in its spines

mimicking, and parodying rather

You see what it is

But where were you born before that

Forgive me for being so stupid

With this booger mustache so dark

Having carried a little blood at the start

I guess if you’re taken for a man, the old way

Was to say whatever men say

Louder so even dead you’re seen

In the distance you mark and redeem

Once looked impossible to countenance – a corner

Come to read AIDS IS RUTHLESS.

SO TAKE IT EAZY.

I can’t say anything after that

But just for a moment

I’m asking will we have made it – a corner

And its wits, ready

To trade attentions, not each other’s

But what’s being tended to

I lift the claim “Ultimately, it’s the omnipresence of the new police that has made the war undetectable…” from the Tiqqun Collective’s Preliminary Materials for a Theory of the Young-Girl (Semiotext(e)).

I lift “foregrounding asignification, mimicking, and parodying rather than simply opposing,” from Daphne A. Brooks’ Bodies in Dissent: Spectacular Performances of Race and Freedom, 1850-1910 (Duke University Press).

Rapper Eazy-E, née Eric Lynn Wright, died of complications from AIDS on March 26, 1995. He founded Ruthless Records and was a key member of the hip-hop group N.W.A.

Farid Matuk is the author of This Isa Nice Neighborhood (Letter Machine Editions) and of several chapbooks including My Daughter La Chola (Ahsahta). His second full-length collection, The Real Horse, is forthcoming from the University of Arizona Press. Matuk serves on the poetry editorial team at FENCE, on the board of the conference Thinking Its Presence: Race + Writing + Art, and he teaches on the MFA faculty at the University of Arizona.