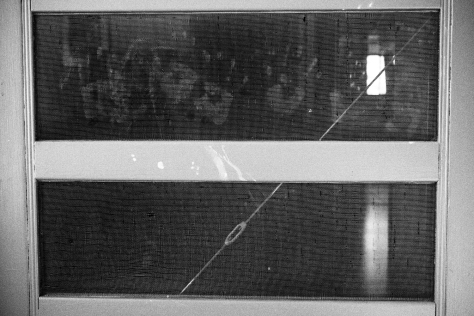 Because the evidence they leave

for us to stumble upon in daylight—

bright claw-scrape on the shed door,

fresh scat next to divots emptied

of their doomed crocus bulbs—

none of this is enough for us;

it stokes an uneasy need

to see for ourselves

the creatures who’ve been here.

Because their occasional 2AM noises—

the bear’s hoot and garumph,

these only remind us of what we miss

by being inside, upstairs, in bed, asleep.

So we strap the wildlife camera—

to one of the pines at the edge

but even when we see

in grainy black and white

the young bear ambling past,

the hind end of a fast moose,

it is, of course, still not enough.

No proof can be made

to bridge that distance;

no envelope of incriminating photographs

of what we can’t even imagine

is going on out there.

WHY I PLAY POKER

Even after a long winter evening

at the borrowed card tables

wedged into the home of a good friend,

though I appreciate, from the tourist’s distance,

the colloquial lingo, the mnemonic admonishment

of “refuse the bower, lose for an hour,”

and all the other words of the grandmothers

of those who’ve gathered to play this game

of their long-ago Midwestern childhoods,

one I’d never played before tonight.

One of many—canasta, bridge, rummy—

pastimes I imagine linked to places, to regions,

to the kind of history that teaches children

the games of cigar-chewing uncles

and tut-tutting aunts, whose moves

they watched and mimicked as they grew.

Everything about those imagined tableaux

of a Navy brat son, spawn of a family so small

it has no business referring to any part of itself

I have found some kind of home in poker, though,

which seems to welcome all comers

with its flashy potential, its secular romance, it global reach,

its basic math. At the kitchen table, or on casino felt,

it’s a game not so bound up in childhood; rather,

one we must come to as adults

with a grown-up’s understanding of gambling, of odds;

pockets full enough of something we know we could lose.

I INVENTED THIS RAIN

It’s nothing new, how the world

grinds on after your death,

with its interstates and snowflakes

and poems and advertisements;

nothing new in my noticing this

in my thinking nothing can be new again.

In this way I get to thinking

about how nothing was ever

new, how what we thought

we found, what we thought

we discovered was already there,

or gravity, or gold, or death.

I think humans are expert

I invented this rain, I imagine

I’m pulling it down across the roof,

I imagine it’s a language

I’ll translate into these lines,

I can’t shrug myself out of.

in the basement for months–yard sale profits,

is legit–and clearly not enough

to be dangerous or ill-gotten–but enough of it

that I’m going to have to wash it off,

The internet is not able to show me

with certainty which strain of mold this might be–

and all their long Latin names

sound equally deadly–so I plunge ahead,

devise my own standards & process.

But let’s pause to note: how lucky I am

to be able to “forget” nearly three hundred dollars

in an envelope, in a cardboard box–

to abandon it to the cryptic alchemy

of air and spore and just one microscopic sip of wet–

How lucky, my filthy lucre,

by peeled away bill, in boiling water–

once, twice–then rinsed and pressed

How lucky, until it maybe kills me,

–have I provoked it by disturbing it?

–have I brewed it into a fatal broth

with bath after bath and noxious steam rising?

about keeping the money moving,

not hoarding or coveting;

a lesson about one more way to die

from holding on to the wrong thing for too long.

First it was just a grey blur among the trees

as I drove past, only half-noticing; then I decided

on one of the oaks. Only when I stopped,

parked, strode across the abandoned lot,

from the tall grass, did I truly see:

from an impossibly thin limb.

The hurricane that washed out the road

didn’t knock it down;

the more patient rains since then

haven’t dissolved it back into pulp.

Legend says that if they build their nests this high in the trees,

we’re in for a bitterly cold and snowy winter.

I don’t know if this means the hornets know

anything. I only know the leaves

that shaded this ashen balloon a month ago

are thinning out, are tinged with crimson;

that each day I drive past, twice, I take account of it,

check the weather of it, as if I am its keeper,

as if someone might ask for a status update,

as if paying attention will make a difference,

and it is still suspended, improbably,

a pendulum at rest, seething with promises.

“I scarcely dared to look / to see what it was I was.”

–Elizabeth Bishop, “In the Waiting Room”

Six foot seas churned us from all sides

as the captain aimed the island-bound ferry

toward the secret places between the iron waves

where we’d get the least knocked around.

For over an hour, the engines alternately

growled full-throated against the Atlantic, the aftermath

of a speedy, early Nor’easter, and fell silent

to let momentum and gravity and water

catch the hull in their impossibly intertwined arms.

to ride the swells as well,

but were anchored by their deep cages.

I rode astern, on a bench just outside the cabin,

and stared the whole trip at an orange life ring

with my name stenciled on it in black.

Not because I thought we’d capsize, but

because out in it at least a little ways,

the spray in my face, the slosh of water at my ankles,

it slapped me awake into such a stupid happiness—

myself, my name, the pitch and roll of the boat,

my body on the boat, a-tilt but still floating,

my stomach sometimes in my throat, until

the island finally rose like the back of a whale

from behind the last of the biggest waves.

on the bench beneath my namesake life ring

instead of across from it. Wore it like a halo.

Wore the coat of my boat, my body, like salt.

Still awake, aching from hiking to the seaward cliffs

and back, I faced the island again and watched

as the ocean slowly drew it down

and away. Home’s harbor crept up behind me

and, beneath the seagulls’ tickertape, took

every syllable of me in among the mussel-crusted pilings.

Liz Ahl is the author of three poetry collections: Talking About the Weather (Seven Kitchens Press, 2012), Luck (Pecan Grove Press, 2010), and A Thirst That’s Partly Mine, which won the 2008 Slapering Hol chapbook prize. A fourth chapbook, Home Economics, is forthcoming from Seven Kitchens Press in summer 2016. Her poems have also appeared in dozens of literary journals and anthologies, most recently in Adrienne: A Poetry Journal of Queer Women, Bloom, and Pittsburgh Poetry Review. She has been awarded residencies at the Playa Artist Residency Program, the Vermont Studio Center, the Jentel Artist Residency Program, and the Kimmel Harding Nelson Center for the Arts. In 2015, she was awarded the Moondancer Fellowship (for writing about nature/the environment) by the Writers Colony at Dairy Hollow, in Eureka Springs, Arkansas. She teaches writing at Plymouth State University in New Hampshire. You can learn more about Liz and read more of her work at https://lizahl.wordpress.com. She tweets at @SurlyAcres.