The last pharaoh, they say, filled a gourd

with bees and held it against herself

and if this is so (evidence suggests no)

but if it is so

the worst job in the palace

Finding in the pharaoh’s nightstand a dead husk,

the excavation with a long-handled spoon

if it is so

how do you even fill a gourd with bees?

Poured down a funnel—plucked by their wings—

lured by sweetness inside—Or, you

If it is only another lie

told about a woman to make her a whore-monster

insatiable consort to be usurped—Octavian’s eyes

on her sex—his hands around her son’s throat—

I can still hear in this lie the hum

of the dying queen in the well

of a gourd’s dark belly,

the one with a goddess’s face

who sings even through history’s quiet veil.

Hail, Cleopatra, if this life offered you any pleasure

above the constant, low drone of the day.

MARRIAGE IN THE FACE OF IMPENDING DISASTER

our coastal cities, our desire

for ice. The last frog may peep

in our decades together; the last lioness

may make her last footprint

in the last mud.

In my favorite nightmare, the end

comes for us as a giant wave.

I wake in the night

sweating after a wall of water

and you, raised a few blocks

from the ocean, dream of the tornadoes

that I have seen,

(and even now, when they test the tornado sirens,

Once a therapist said,

“There are two options

You’ll either break up

or you’ll stay together

until one of you dies.”

I give “I will” without the why;

and still I choose you, my home,

hope a bird singing in the corners of our rooms

in this fight, the last fight, of our lives.

where Dan Aykroyd’s belt undoes itself,

then the button on his khakis pops, the zipper

unfurls and his mouth opens in shock, eyes cross

and roll back into his head — defending it, Aykroyd said,

“I have a friend who had three women

visit him in a haunted house in Louisiana,

and it was one of the greatest nights of his life.”

And I picture this “friend” in some gothic

and wonder: are foursomes with ghosts

of double-dutch, wondering where

they should jump in? Are even the dead

forced to diddle themselves and wait?

God is the mouth of Gabriel in her ear.

God is the holy dove breaking

through an arch of flying babies.

heavy and immaculate. In Murillo’s,

she crosses her hands over her heart.

There is a basket of folded laundry

at her knee. In Da Vinci’s, I can’t read her face,

but a book is open on the lectern.

She seems at peace, one hand raised

as if to ask if the archangel would like a cup of tea.

I like that her knees are open, her ankles uncrossed.

Mary is manspreading. The best Annunciation

is Simone Martini’s in the Uffizi:

a 1333 gold on gold confection

where Mary pulls away from the kneeling angel

and familiar lily spray. Her lip is curled,

as though the angel stinks,

as though she wants to say,

“The Lord is with you,” he repeats. “And when I say

For years, at work in the mall,

I curved my hands up

scooped around her elbow

and pulled, as on a rope,

down the muscles leading

to her palm. Pressure applied

which lies at the base of the thumb,

Don’t make love, I was told

when being trained for the job,

my ministrations too light.

than a limp massage.

She grabbed me hard. Fuck it.

Pinching, firmly, you could watch

an “arm treat” and then a “face treat”

with my hands sliding in prayer position

across the bridge of a woman’s nose.

“This feels so good,” she purred.

“I could just take you home with me.”

“I’m basically a volunteer,” says the Sephos at the counter

crowned in the latest magic blond: homebrewed highlights in his tidy pomp.

Nametag: Matte. More cheek than chic, “Will work for food and lipstick.” He has trompe

l’oeil contours, claims his paychecks dissolve into aerosol and powder.

Mine, too. I drown from aisle to aisle in this year’s Pantone color

and touch as much as possible, swab my lips with every cru classé: Noir

I look for Blocked Heart, the signature shade of Zipporah the flint-cutter

who circumcised her son to save her man. Though the story’s unclear, now,

If she sacrificed her own “Understanding.” (Clit?) Translation’s detritus:

is she named “bird” or “beauty”?; God’s wrath at the inn in Exodus;

“Just once” — once! — “in her whole married life” she spit on godliness.

Matte says, “She did what she had to do. Her man was up to his waist in snake, child.”

I pay, Blood on my mouth for my bridegroom; my teeth smudged dark with smile. 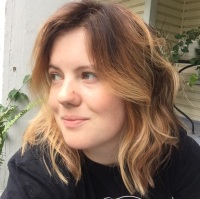 Eileen Rush is a queer Appalachian poet, writer, and narrative designer living in Lexington, KY. She has worked as a journalist, grant writer, social media marketer, and soap seller. All of these jobs have influenced her writing, but some made her feel and smell better than others. She earned an M.F.A. in Creative Writing from the University of Florida. Her work can be found in Pleiades, The Journal, The Southern Review, and elsewhere.