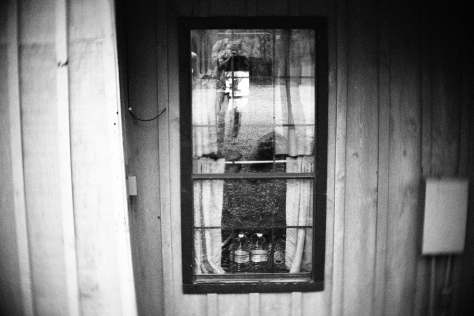 THE SECOND YEAR AT THIS ADDRESS

The starved cat in the alley lets out a sound

three times larger than her body,

again and again. I’ve never seen it, only heard

roar to life. I know she is only hungry.

That the men who arrive before dawn

to absolve the dumpsters of what’s still

good to eat are hungry too. These days

of planes, my neighbor starved of touch,

the man smoking up the block, who has never

looked me in the eye when I pass, hungry

for his own thoughts. In March, the city

were out of frame, behind doors, drilling

our gaze through peepholes. That stillness

hasn’t left even as we’ve roused back.

A year ago I moved from a perfect-looking

house. No one saw how sad I was.

Each room a museum of my thoughts.

So still you could hear a breath give up.

Now, the alley beneath my window crawls with life

but only when I’m not looking. Each day

I’ve lived in this apartment, the sky performed

the same color show without fail. When it

rained last week, it shook me out of dreams.

I remembered who I am. Or, really,

who I’m not. I’ve spent this year pruning back

What are they seeking, anyway? A street map

resembles a diagram of the human body.

We just can’t help ourselves. I get it.

Too much I’ve built in my own image.

Too much about myself I’ve assumed

The pistons of his hands fire into my chest, point blank

the first time a boy I like has reached

later shows me how to lie

My true age is factorial

this year x last year x year prior and so on

Tug my hand and I multiply around you

I wrote a one-sentence memoir in response

to the death of someone I wanted to die

The harmed adolescent in me honors

the harmed adolescent in you

Zero exists only in concept

You can never have nothing

You can never touch nothing

You can never be nothing

His hands know just one language

The root of hand is manus

A man’s origin is emptiness

Two men in love mean one

must consume the other

The echo of an injury will speak

while the cavern remains split

Here is the city

full of bad news, minus signs

where their eyes should be,

on jeweler’s velvet, each one

This really was your opportunity

to wow us with your vision. Honestly,

along the sleeve, but what’s up with the neck?

around her throat. The blouse is off. She can’t

conceal her boobies while she walks—it shows

I could see this at the Grammys. It’s got

an edge, an attitude. You really shot the wad

on this one. How much did this cost to make?

It looks all right,

besides those few mistakes.

It’s cool, except she looks a little fat.

You have a point of view—I’ll give you that.

You have a point of view. I’ll give you that.

bland and matronly. You should’ve scrapped

this look and gone with something else.

we’re on the subject, please explain these shorts.

I don’t know who this woman is, where she

goes. Does her job involve a pole? Transport

us somewhere new with what you make: believe

To me, this looks a little “catalog.”

And more importantly, I have concerns

about your taste. Does it exist? Or are

It takes a special girl to wear these clothes.

It takes a special girl to wear these clothes—

What’s this business with the shoes?

on Ice. This seaming also needs some work.

I’ve heard of ruching, but come on—you have

to put a little effort in. Don’t shirk

construction in the interest of a laugh.

Fashion is a biz.

described New York—she said, It’s all there is.

But what I’m seeing here’s too Golden Girls,

and not enough Thorn Birds.

He tells me I’m handsome

in the chat, unlocks his pics

to reveal a carousel of horse-sized

dicks. Wants to raw me

until I bleed. I demur,

on whim. You’re not so hot,

I could never fuck someone

in the glass: my monstrous face,

They don’t even shine right;

Take down the drapes of night

from their pins in the sky.

happy hours, and all

Black out the clocks, their

so everything gets done.

and wash off our

Destroy the music of doors

clicking shut behind you

Kill all the ears; suffocate

Charles Jensen is the author of the poetry collection Nanopedia and six chapbooks of poems. His third collection, Instructions Between Takeoff and Landing, was the Editor’s Selection for the 2020 Akron Poetry Prize competition and will be published in 2022. He received the 2020 Outwrite Nonfiction Chapbook Award for Cross-Cutting, a diptych of essays that hybridize memoir and film criticism. The City of Los Angeles Department of Cultural Affairs designated him a 2019-2020 Cultural Trailblazer, and he is the recipient of the 2018 Zócalo Poetry Prize, a Dorothy Sargent Rosenberg Prize, the 2007 Frank O’Hara Chapbook Award, and an Artist’s Project Grant from the Arizona Commission on the Arts. His poetry has appeared in American Poetry Review, Crab Orchard Review, Field, The Journal, New England Review, and Prairie Schooner, and essays have appeared in 45th Parallel, American Literary Review, and The Florida Review. He founded the online poetry magazine LOCUSPOINT, which explored creative work on a city-by-city basis. He hosts The Write Process, a podcast in which one writer tells the story of crafting one work from concept to completion, and with Jovonnie Anaya co-hosts You Wanna Be on Top?, an episode-by-episode retrospective of America’s Next Top Model. He lives in Los Angeles and directs the Writers’ Program at UCLA Extension.