[The following poems are from Emily’s Advice to Girls in the New Millennium, a series of prose poems based on intuitive, imaginative translations of Emily Dickinson’s fascicles, the handbound books that she curated from 1858 to 1866.]

When the birds go silent, it’s because your heart is a violet buried in snow. When your lover is a butterfly, you should take her into the woods and let the oak tree whisper—the barbs and the brambles of the heart, the time before seeds, something deep within the breast of it, the uncertain light of it shining like the change of the seasons. Before the wonderment of the bridge, sing your vows to her like baffling music.

Once you understand progress, you become a machine ravaging the belly of the earth, a pool of grief settling beneath the tree. Read the history of rebellion until you understand what they were fighting, until you’re less afraid than you were before. Remember that the best crucifix is one that fits in your pocket like an invisible belief. When the voices keep taunting, remind yourself that you’ll eventually get over it, become more eccentric, lie down and smell your body in a patch of dishonored grass. There’s no such thing as magic, only a door to a room filled with birds, the sound of your humble heart beating until it stops—and your soul’s extinguished.

Eventually, the bees will stop pollinating and things will stop growing and you’ll wish you were somewhere else. The act of baptizing yourself is the only one that counts. Someday, you might be unrecognizable, and you’ll keep turning round and round in the mirror, your homely feathers dripping everywhere until it starts to make sense again, until you begin to believe in the afterlife—because it’s the only thing that gives you hope when you have no one to make love to. Remember that the only thing you can count on is the sharp smell of death, the flies buzzing around the table, landing on the rinds that you’ve tossed to the ground.

When you’re burning in the night, your skin will blister and the river won’t be able to reach you. Ask yourself it it’s better to remember the sweetness, the time before you split apart and could see the sky from the inside. Clutch it with your eye, like the notes in the margins—that little slice of mind. How the rooms are filled with the gifts of the cosmos, things you can’t ingest or possess. Remember that you’re superior to nothing and no one. That you can fill in the gaps, solder yourself at the seams, prepare to be tortured again.

Maybe your feet have fallen asleep. Maybe you’ve forgotten that your ears are like a shell on the coastline, the sound of the spirit bellowing deep within a fire. Maybe eternity is just the ocean you can’t see, which is beyond the one you can. Remember that every artist spends their life attempting to recreate the sincere beauty of it and every single one of us fails. Sometimes, there’s something off about the lines, the break that happens after a brittle flower, the slow diligence of the sky. The moon is a child of god, a chin of gold, a perfect face that you can’t stop objectifying.

When there’s less than half-a-dozen of anything, there’s really nothing to see. You can speculate all you want—maybe they were short of breath or drowning in suffering. Maybe God’s been laughing all along. But what’s the point of having conviction if there’s no formula for conjuring glee? Sometimes, girls are more astute than experts, and you just have to keep mouthing the words until you believe them, until you can taste the suffering for yourself. It’s easy to see why girls go back to God—because time heals nothing and life is really just the monarchy of the birds.

Not the days anchored by divinity. Not the condemned lip or the fissure in the moon, the tissues stuffed under the door. The famine of vanity and the foreignness of your own face—like an immigrant without a settlement, the hollows of your eyes like the house we can never inhabit together. The crisis behind the door. The habits we form out of curiosity. How we become pioneers of disaster. How we have accepted the chemical concoction of fate. How we have witnessed the conviction of atoms. To be impaled is to have a liturgy composed in your honor, like little gifts of meat hanging from the trees, the squirrels singing your name as they devour the bloody hearts.

Like a witch, she’s carved a breathing woman out of corn, dropped your brain in the deepest water, her lips a scarlet buzz. The doors are closing and you can feel it—like the end of a June exhibition, like your mind italicized, the aloneness in the room like a single blade of grass, like the way an idea is like a door without a caption, a wrinkled morning and a nameless bird, the bread you store for later, the decade flying by like a circus, the seeds destroyed, everything outgrowing itself as the girls sigh their stupid sighs and wave goodbye. 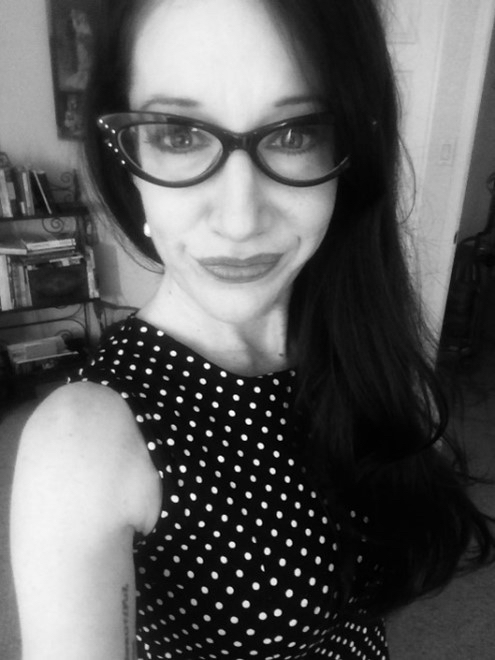 Rosemarie Dombrowski is the inaugural Poet Laureate of Phoenix, AZ and the founder/director of Revisionary Arts, a nonprofit that facilitates therapeutic poetry workshops. She’s the founding editor of both rinky dink press (a publisher of micro-collections of micro-poetry) and The Revolution (Relaunch), an award-winning, creative resurgence of the official newspaper of the National Woman’s Suffrage Association. She’s published three collections of poetry, including The Cleavage Planes of Southwest Minerals [A Love Story], winner of the 2017 Split Rock Review chapbook competition. She’s the recipient of an Arts Hero Award, a Women in Philanthropy Grant, and Fellowships from the Lincoln Center for Applied Ethics and the Academy of American Poets. She teaches courses on women’s literature, medical poetry, and the history of radical underground publishing at Arizona State University.