DIGGING FOR TURNIPS IN THE MULTIVERSE

The sound of water

Falling on a parchment of dirt

Briefly spells a message meant to be understood bodily.

No harm in resting in a quilt of blood,

If that blood be your own.

Light-centuries away, stars are climaxing (the way things go)

And the daffodils, deaf as a stone,

Nod their heads in affirmation,

A giant toad lurks over the known universe,

Disproving our theories again and again.

I wasn’t even lonely

Until you were born.

MY VULVA IS A SHADOWY COURTYARD

In a city of passwords. This is my time

To not be a ghost. I intend also

To be made of letters and numbers,

On the sidewalk, a wriggling ontology

With a new shade of lip gloss.

Just as I discover my sultry collection of atoms

A brief spectrum of colors

Approaches my periphery. The magnetic field

Of passers-by disrupts the afternoon,

In the air around us, soft beginnings

Units of sense or experience: a wet leaf

Pressed onto the cheek,

A ream of spiderwebs dangling from the sky.

We collect them in a frenzied haze,

Of light and sound unfolding in our ears.

At one end of the universe.

Another universe floats by undetected.

You wade through the shallows, lonely for truth.

Silver fish throw themselves against the escarpment,

Their broken bodies returning to the encroaching black.

A crowd walks right into the omen.

In its pale pilled nightshirt, the Etcetera presses a button

To rewind time back to the very beginning.

It fell asleep and missed its favorite part.

A blue orgasm spatters across the screen.

A small child wakes up in the dark.

Tethered to our wrists?

What else is kept prisoner?

Wonder what happens when you throw a glass bottle

Filled with the pupae of angels

Over the side of a red cliff?

Ever been downstream from the Everything

The meaning of life into the water?

The fronds stay where they are.

A house on the shore while Everything’s

Who keeps shifting side to side as the courtroom fills

With the green, discarded heads of sea slugs?

One day, leaving the house becomes a territory

That is no longer yours.

On a nearby shipwreck,

The abalone sweeps out its apertures,

An android rushes by

The distance to the edgemost star.

Ready to take the turn into non-remembering?

Alive with the discordant remnants of tongues?

I am getting older; just watch me

As I drive my little car off the road into a bramble;

The bramble is distinguished; it is not

Its fault I am bleeding into its arms; to save time

I turn inside out; I mistake my genitals for a man’s;

I parade around with a tarp collecting spacecraft;

I try to have sex with a flower

And get interrupted; a hawk comes to rescue me;

It buries me among its eggs; I try to remain

Very small; the ghosts are in the parlor playing cards;

This makes me nervous; my skin shaped like a basketball;

Spiders walk all over my circumference;

Protect me from man-man; I wake up in a sunflower;

Forms a sphere the size of a shrub

Around my head; its brambles grab onto the air;

It messes up some electrons; one of them yells “FUCK!”

And I have to start my story over;

I am getting older; just watch me

By now, even the clouds are mutating.

In front of the moon,

It was an accident.

It was just one possibility

Some day I will float

5 inches above my body

Clouds are the spirits of oceans

They take off their slippers

Before they enter the house.

They lift the train of a long dream.

I am going to ask you a few questions.

I do not want you to become upset.

I know it is a sensitive topic for you, questions.

You remember a time when someone asked you

A question about Belonging

And then immediately transmogrified into a pyramid

Of snails. This kind of trauma lingers.

Rather than asking you a question, I am going to

Describe for you a sentence. The sentence

Has a beginning, middle, end.

The basic biology and theology of a centipede.

When I feed the sentence at night

Through my long, exclamation mark nipples

It speaks one of seventy languages.

At the end of its life, the sentence walks sideways

Into a plague and is forever stript

From the annals, and instead hangs

Over the living room of our entire lives.

There is a hole in the glow.

The people gather around it, looking afraid.

Is it warm in there?

Do they practice psychiatry?

They rope off the glow.

The people are too close to the hole.

An allegory is written about the hole

So parents don’t have to mention it directly

When warning their children about the hole.

Someone starts throwing pennies in it

For luck, and then suddenly

The people are throwing all kinds of things

Into the hole: sweaters, candelabras,

Nothing ever comes back from the hole.

The people lose their superstitions.

They forget about the hole,

Which they once feared and revered.

Into the hole, champagne bottles,

And the hole starts to fill up.

The people start noticing the hole

Again. Where did it come from?

Does it have a podcast?

An avalanche of refuse and corpses

Pours into the glow.

Who could have done this!

What happens to my nice slippers!

At first, I am asleep. Then dreams crawl in

I enter a field of elk.

We all agree that we have bodies.

Is of some importance.

I have never seen my dead father here.

It has become clear that I am an elk,

Albeit of human form,

In the center of our collective awareness,

There is a hedgehog on its back

It is today’s news.

Do not threaten me with bears.

I can barely detect my own eyeball.

I keep my head fastened securely

To my throat so the sun does not kill me

With its beams, hurling themselves through

Do not make this about you.

There were no “first bears.” They were all

Birthed from the abstraction of a single zoo.

Don’t say with a look of hopefulness:

“There are still bears that walk the earth.”

There were never any bears, and don’t even begin to think

There was ever a zoo. 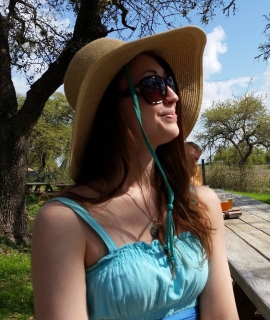 Julie Howd is the author of Threshold (2020), winner of the Host Publications Chapbook Prize, and Talking from the Knees Up (dancing girl press, 2018). Her work can be found in the I Scream Social Anthology, Deluge, The Spectacle, Sixth Finch, and elsewhere. She lives in Amherst, MA.