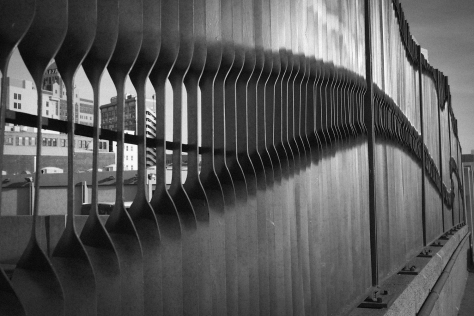 A cardinal touches down on a Japanese maple

but can’t tell us where they’ve taken

all the children. We take turns watching,

we take turns playing songs for the mothers:

to form a thing that could unseal a stone

from the mountain. Only there is no one

walking out into the light as if resurrected.

That copper-tinged wind, that citadel

whose once beautiful blueprint is fading.

The light, too, is dismantling; or in the throes

of change. My face is the inside of a shell up-

turned to the moon. A rune, a coelacanth.

WHEN I THINK I COULD BE BEAUTIFUL

Though I too live in a blur of worlds, I am one

shade of brown: my blood not as obviously mixed.

Who gave me this nose? I have no dimples. I have a brow

broad as a page. The eyes tell when I am smiling.

And eyebrows constitute a language of their own. Never

asleep, they are two republics separated by a bridge.

Do you know the power of discarded fishbones?

I know delight can interchange with dilate.

I’ve strung the dried stumps of my daughters’ birth

cords on a safety pin; this is one way I keep them close.

Do you know the sound the tin bucket makes, the shape

of its mouth as it looks at the sky from inside the well?

In the birdhouse made from hollowed-out wood: wasps

coming and going. They are not angry yet, only nesting.

The ginger flower’s torch burns with scent in the middle

of the garden. Not even the rain can put it out.

TEXTURE OF THE LOST

What poverty is amplified by stacks of moving boxes? Somewhere in the depths of one: a pile of unpaired socks, a spoon without its fork, a book whose frontispiece is missing. In the grooves of the madeleine pan, a memory that sticks and will never come off. Are the simplest things the best? In her mind, she subtracts one piece of furniture after another. He has a turkey sandwich on wheat every single day. She can’t. She needs to mix things up, so her taste buds remember the yellow of pineapples, the bright bitter green of kale. Where posters were once held to the wall with little bits of putty, now there are oil spots darker than paint. Once, as she stood in front of a shop window, the blur of a passing truck wrote letters in reverse on her forehead.

So long now has that story of deep wintering

obsessed me: how the club-footed god sets his sights,

plucks a girl out of a field as easily

as a flower, takes her down with him.

Which is to say, look beyond the metaphor of brute

abduction to the underworld. But for the most part,

this has been the mother’s story— how she scours

the land and badgers the powers that be to get her back.

Fallow the fields and seas; famine and drought,

fruitlessness, the icy blade of her anger raking

across the countryside— I’ve wished too

for that wide level of influence but mine

I work but brace myself for another

failure to raise ransom for permanent

clean and stark the banner of my hope:

bone buried in a field of snow.

When the cleaning women come again it takes much more

cajoling before you let them into your house, let them

scrub the grime caked over nearly a year on floorboards,

with the weight of every last rusted spoon and knick-knack

you salvaged from your other life— Then, you were known

as wife of the retired judge everyone remembers, dapper

to your own hand-crafted elegance. Perlita says, gently,

Let us wipe the dust off this picture frame, then

you can put it back in your bedroom. Nothing is

going to disappear. How long has it been since you lifted

the faded mustard flannel draped over the Winkelmann

upright piano, since anyone ran fingers over its

stop just short of the soundboard. Has the refrigerator

light gone out, or has someone disconnected the appliance?

Extravagance, surplus poured around the ordinary:

for you, slipping a half stick of butter into a pot

of pasta; or saying that in some countries, men show admiration

for women by slapping their butts. Do you remember going

into the shoe store downtown at least once a month? Now

slippers from your recent confinement. The last time we speak

on the telephone, you cycle from crying over your empty bank

accounts to railing about the loss of your house. How

to write about a room with a bare light bulb, a threadbare

sofa, half a moon broken clean in the sky from its shadow?

This elegy for everything we’ve lost, and lost between us.

The light, and the flower inside it; its flickering,

its gradual fading. Trickle of sand in a glass crucible

correcting itself, spelling out time. Everywhere

there are streets named after saints or dead

dictators— in this way we are reminded every memory

can negotiate its price. Don’t we already have fables

that try to pass for facts? In blue cages on the patio,

children chirp lessons until the curator comes to spread

a grey drop cloth. In college, my art professor

pointed to a slide of St. Theresa, the angel’s lance

poised above the flesh of her breast. Isn’t that how we

look in the throes of falling or flying? I was taught

suffering is another name for holy. I was told to distrust

the beautiful flames of pleasure that sing like birds.

Luisa A. Igloria is one of two Co-Winners of the 2019 Crab Orchard Poetry Open competition for her manuscript Maps for Migrants and Ghosts (forthcoming from Southern Illinois University Press in 2020). In 2015, she was the inaugural winner of the Resurgence Prize (UK), the world’s first major award for ecopoetry, selected by former UK Poet Laureate Sir Andrew Motion, Alice Oswald, and Jo Shapcott. Former US Poet Laureate Natasha Trethewey selected her chapbook What is Left of Wings, I Ask as the 2018 recipient of the Center for the Book Arts Letterpress Poetry Chapbook Prize. Other works include The Buddha Wonders if She is Having a Mid-Life Crisis (Phoenicia Publishing, Montreal, 2018), Ode to the Heart Smaller than a Pencil Eraser (2014 May Swenson Prize, Utah State University Press), and 12 other books. She is a Louis I. Jaffe Endowed Professor and University Professor of English and Creative Writing, and teaches on the faculty of the MFA Creative Writing Program at Old Dominion University, which she directed from 2009-2015.

Photo of Luisa A. Igloria (above) by Chuck Thomas