I drove the misery

only a panhandle is capable of,

a West Texan mystery towards a selfie

in front of the San Angelo City Limits sign

a sky at my feet a flatness

matched by the way I use “moon” as a facial description,

and a dirt road for 60 miles

to find my way back to my beloved

in a super 8 film wearing white, a hellion

the queen of her cousins,

Grandpa Chico sneaks them to her under the table

—everyone can see. His affection a rough rasp that billows

in the nape of her vellicate,

an accent that prefaces bells and sales of petrol,

the best in San Angelo

where all of their kin trace their line before others

I’m looking for Chico’s gas station, the only ghost in this town

full of chain restaurants that all look the same

My beloved’s hair falls down long and straight

and the scar along the trail amid her soft lips

beneath a mutinous chin,

The little girl in the film makes no sound.

And I wake up at 5am to meet the sunrise

just to say I did

CALL OFF THE DOGS

in the garden and refrain from weeding the flowers you call weeds,

break the tar down in my lungs

salve in the mugshot

turn the page history book where it all looks the same

Mexican troops on the ground

I know you say annoyed as fuck

you know everything that spills off the parchment about what used to be Mexico.

for the New York relatives,

only you can save me

when you touch me with the tips of your fists.

Hold on, Sonora, hold on to yourself for one more winter

where we call these ocotillos, these the tunas.

We call these the desastres.

Yo soy Sonora, in a time machine adobe

that takes me back to an 1848 that can wait until

we’ve mastered our astrology of fate.

I had no love but love

and no occupation but labor

this is why I call you pasty, lover. Safe word repeat cinco de Mayo comes true.

Mercer shaved off their hair in a particularly brutal manner. The Anglos blazing infinite.

What I drink doesn’t

heal the cut on my belly

knees my country piss on me

too busy to be dreaming here

just us miscarriage      in the building of state out of frontier

the years to come

the years to yonder

I’m a lumpenproleteriat here to set a precedent to hunger, a rage in your belly

and I’m yawning the best years away waiting

to find ourselves as lovers in a land

lording over us again

scraping flesh from our rind

MY TEETH BREAK THE ICE

and the wind scratching out of its skin

the remaining moisture from my hands

The ice melts The stone erodes

the obedience; it got us

birthing flowers in my pores

for memory to condition body

back from the part of the dead we sprung from

here we come on winged eyelids

playing angel has beckoned us, a pack between

I want to wear you down like mammalian powder,

against your omniscient maw

a monster with no brood, no control, a mestiza maker of messes.

We get blood on the sheets again.

Before your sex sunders into monotonous stone,

the quarry yawns inside             your mouth crusting with phosphate,

the earth dried home for stray and starry scoria; the pine cones pleaded

your restless tresses laid bare on the concrete parts of a national park.

you took the pulp for granted

for I, mere boscage and eager chaparral            avoidant fire warning

I never learned to keep my wailing at bay.

You didn’t give me back. You took an axe and thought about it

and said I had jouissance but I didn’t have a job.

I was kindling in your arms. 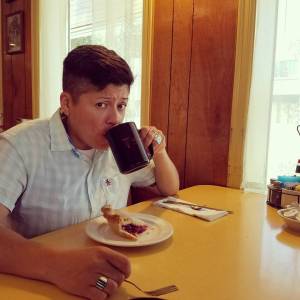 Raquel Gutiérrez is a writer of personal essays, memoir, art criticism, and poetry. An adult child of Mexican and Salvadoran immigrants, she was born and raised in Los Angeles and currently lives in Tucson, Arizona where she is a semester away from completing an MFA in Poetry and Non-Fiction from the University of Arizona. Raquel is a 2017 recipient of the Creative Capital | Andy Warhol Foundation Arts Writers Grant. She also runs the tiny press, Econo Textual Objects (est. 2014), which publishes intimate works by QTPOC poets. Her poetry and essays have appeared in the Los Angeles Review of Books, Open Space, The New Inquiry, Zocaló Public Square, and other venues. For more info, click here: raquelgutierrez.net/.